As a media worker, Ou Zhihang experiences significant public incidents that uncover all kinds of social issues. He realizes that many of the issues have to be questioned closely and persistently. By intervening with the incidents through the art and the internet that are not restrained by journalistic time frame, the Push-up artwork helps to extend and reinforce the public’s attention and consideration on the issues, which in turn pushes for proper settlement of the issues and propels society’s progress. 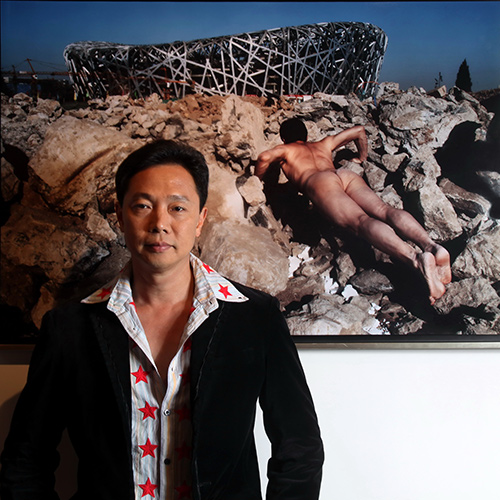 Ou Zhihang was born in Guangzhou China. He has been working for Guangdong Television since 1988 as a journalist, TV producer and anchor. He took up photography in 1970s. In early 2000s, he transformed into a contemporary artist. In 2008, his See and Be Seen performance art series triggered a profound concern, making the “Ou-style Push-up” a public symbol with unique meanings. In 2009, The Moment series which combines “Ou-style Push-up” with major social events in China, was widely acclaimed by critics and academics. In 2010, The Moment won the Honorary Mention in the 53th World Press Photo Contest. One of the unique and important parts of Ou Zhihang’s art is to reconstruct news events through constant internet presentations. This is also an effective way to achieve the work’s dissemination, communication and growth. Through more than seven hundred Push-up photos, he explores new possibilities of contemporary art in the internet era.

He is convinced that social progress replies on the awakening of people, and he is confident in the pushing role of art during the process. Although keeping a low profile when creating the actual photos, he is highly profiled in society as he emphasizes the communication and interaction between the socially engaged work and the masses.