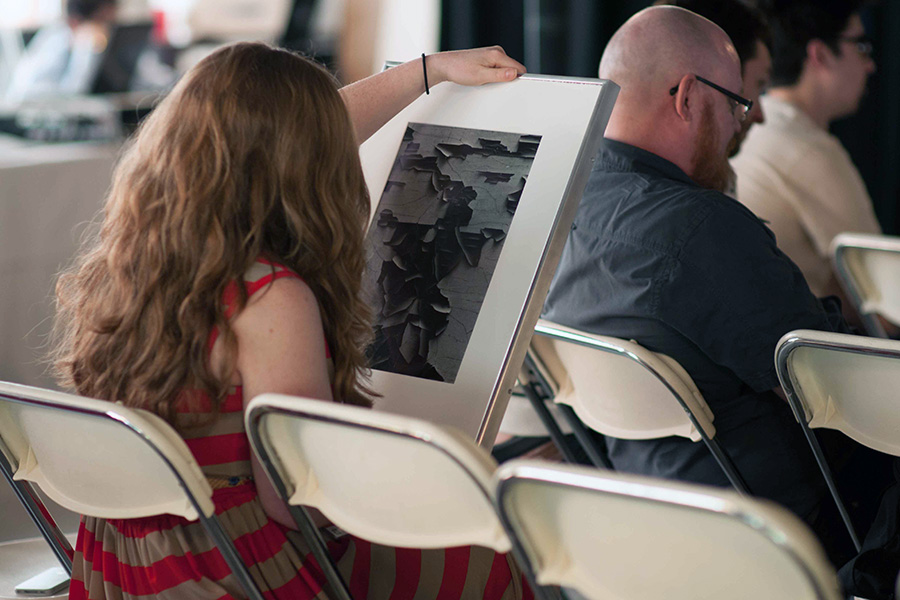 There are a multitude of portfolio reviews around the world where photographers can present their work, get feedback, and meet industry heavyweights. But how do you know where to go, how to prepare and what the value will be for you? This panel will run down many of the most important reviews, giving you insight into how to know if you’re ready to attend, what you should know before you go, and how to prepare and choose the right review for your work.

We will give you a rundown on the more well know reviews, and some important tips you can use when deciding whether you are ready to show your work.

Photographers Isa Leshko and Rania Matar have gotten recognition for their work through showing their projects at various portfolio reviews.  They will talk about their own experiences and offer insights into how they made their choices.

Charles Guice, the director of Charles Guice Contemporary is a frequent reviewer around the country, and will offer his ideas about what makes a successful review, which are the most prominent reviews, and how a photographer can make the most of the experience.

Moderator Stella Kramer has been a portfolio reviewer at many events around the country. She will talk about the important things photographers need to ask themselves before making their decision and spending their money to attend a review.

Charles Guice is the director of Charles Guice Contemporary. Recognized for developing new talent as well as for advancing more established artists, he has been instrumental in the careers of several of today’s leading contemporary artists including Erika Diettes, Birthe Piontek, Hank Willis Thomas and Carrie Mae Weems. Since establishing his eponymous gallery in 2002, Guice has placed works in prominent private and public collections throughout the United States and abroad, including The Brooklyn Museum of Art, The J. Paul Getty Museum, The High Museum of Art, The International Center of Photography and The Williams College Museum of Art. A former healthcare executive, he has served on the Boards of Trustees for the California College of the Arts and The Museum of the African Diaspora, and was a founding member of the nominating committee for the Aperture West Book Prize. Guice has curated a number of exhibitions throughout the U.S., and was a principal, Managing Director and co-curator for Photo Miami. He has been an invited juror for Center and The Center for Fine Art Photography, as well as a frequent portfolio reviewer at ASMP, Atlanta Celebrates Photography, En Foco, FotoFest, Photolucida, photoNOLA and Review Santa Fe. Guice recently served as a curator for Discoveries of the Meeting Place at the 2012 FotoFest Biennial.

Isa Leshko (b. 1971) is a fine art photographer living in Philadelphia, PA. She has had solo exhibitions at the Corden|Potts Gallery, the Galveston Arts Center, the Griffin Museum of Photography, the Houston Center for Photography, the Silver Eye Center for Photography, and the Richard Levy Gallery. Her prints are in numerous private and public collections including the Boston Public Library, the Harry Ransom Center, Haverford College, and the Museum of Fine Arts, Houston. Her images have been published in The Atlantic, The Boston Globe, Frankfurter Allgemeine Sonntagszeitung, The Guardian, Harper’s Magazine, The New York Times, and Süddeutsche Zeitung Magazin.

Rania Matar was born and raised in Lebanon and moved to the U.S. in 1984. Originally trained as an architect at the American University of Beirut and at Cornell University, she studied photography at the New England School of Photography and the Maine Photographic Workshops. She teaches photography at the Massachusetts College of Art and Design.

Matar’s work focuses mainly on women. Earlier projects recorded the lives of women and children in the Middle East, and over the past three years she has completed A Girl and Her Room and started a new project L’Enfant-Femme. Matar has won numerous awards, including the 2011 Legacy Award at the Griffin Museum of Photography, 2011 and 2007 Massachusetts Cultural Council artist fellowship, first place at the New England Photographer Biennial and Women in Photography International. She has received honorable mentions at 2010 UNICEF Picture of the Year Award, Lens Culture Exposure International, Silver Eye Center for Photography Fellowship, and CENTER. She was selected at one of the Top 100 Distinguished Women Photographers by Women in Photography, and was finalist for the Foster Award at the Institute of Contemporary Art, Boston. Her images are in the permanent collections of several museums worldwide and her work is represented by galleries in the US, Lebanon, Singapore and Qatar.

Matar’s work has been widely exhibited in the US and internationally, most recently at the Institute of Contemporary Art Boston, Southeast Museum of Photography Florida, Blue Sky Gallery in Portland Oregon, Leica Gallery in Solms and Warsaw, Sana Gallery in Singapore and Galerie Janine Rubeiz in Beirut. A selection of her work will be included in a major exhibition about Women Photographers from the Middle East, at the Museum of Fine Art, Boston in the fall of 2013.

A Girl and Her Room is Matar’s second book with essays by Anne Tucker and Susan Minot. It was recently listed as one of the best photo books of 2012 on PDN, Photo-Eye, British Journal of Photography, Feature Shoot and Le Journal de la Photographie. Her first book Ordinary Lives was published in 2009 with an essay by Pulitzer Prize winner, the late Anthony Shadid.

Stella Kramer is a Pulitzer Prize-winning photo editor and creative strategist based in New York City who works with photographers of all genres and levels to help them shape their portfolios and websites, plan strong marketing campaigns, and see their own work in a new light. Stella has worked on many of the major news events in recent history and while at The New York Times, Stella was part of the team that won both the 2002 Pulitzer Prize for Breaking News Photography and the 2002 Pulitzer Prize for Public Service. She has worked for such major publications as The New York Times, People, Entertainment Weekly, Sports Illustrated, Newsweek and Brill’s Content. Stella has curated photography shows for the Museum of the City of New York, South Street Seaport Museum, the Griffin Museum of Photography and Fraction magazine online. She also lectures, reviews portfolios all over the country and teaches at SVA in New York and in Caracas, Venezuela. Her blog, Stellazine, is about all things photography and features both commentary and interviews with photographers of all genres who discuss the creative process.